My home computer has been running Ubuntu Desktop (Debian Linux) for years.  It has only been recently that I have had the pleasure of working with Linux Servers.  I have set up, configured and administered a few LAMP (Linux, Apache, MySQL and PHP) web servers.  For the last couple days, I have been playing with Citrix Xen Server and HyperV to proof-of-concept virtual host NIC Bonding / Teaming and it’s effect on existing Virtual Machines on each platform.

I set up an environment (Xen, then HyperV) on a test server (Dell R710) and added a few Linux VMs (Got to play with Ubuntu Server 16.04 LTS and CentOS 7).  Then I did the Bonding/Teaming and watched for what happened to the existing servers and network connectivity.

Xen Server did very, very well! It had zero network disruptions as NIC Bonding was created and put into place.  Very impressive.

HyperV was less impressive.  There were multiple connectivity disruptions and panic-inducing bouncing before it settled down.

All that, to show off a screenshot: 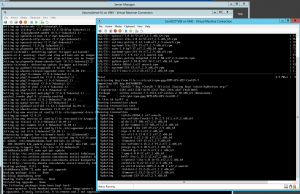