One of my favorite accomplishments was the “Trustmark Computer Console” that I created for use at Trustmark National Bank.  It was used by the call center and help desk from the time I created it until at least two years after I left.  It may still be used some.

I wrote the original in AutoIT3.  After a while, I re-made it into a VB .NET project.  However, the VB .NET did not do a WMI query quite right, so I had to write a helper script in AutoIT3 to get that piece of information.

Here are some screenshots :

Some items are blurred out, but under “Computer Name” is a text box where you would put in the name of the computer in the network you wanted to get the info from.  The red/green buttons under that were our major services or processes that should be installed and running.  You could right click on the buttons and start/stop/install those items. 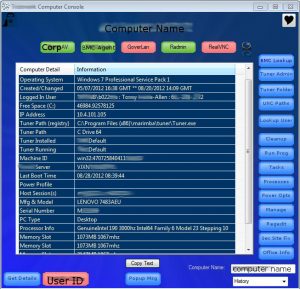 Pressing “Enter” from the Computer Name box would go out and get the current information – such as OS, logged in user, free space, IP address, last boot time, mfg and model, processor, memory, etc.

The buttons on the right would run different scripts to automate common tasks.  At the time, on a single domain, it was fairly great for Help Desk Technicians to quickly gather info and fix common items.  I now use Labtech for almost all that functionality.